Back in May 2017, when Singapore-listed construction, engineering and property development firm BBR Holdings purchased Goh & Goh Building en bloc for $101.5 million, little did CEO Andrew Tan realise that he had hit the jackpot. 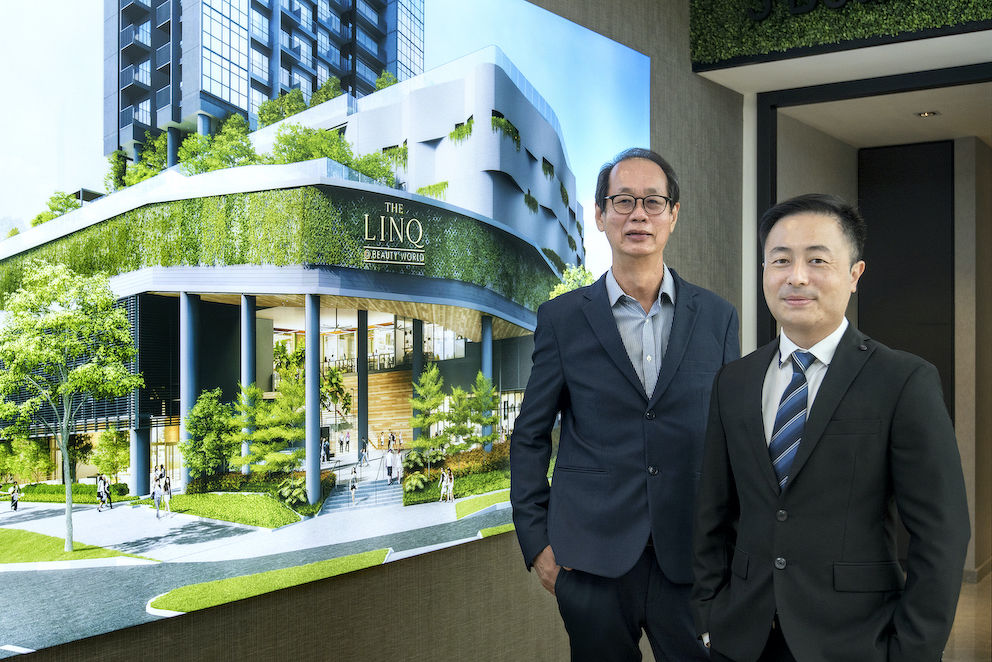 Andrew Tan (left) and Jeryl Sing with the artist's impression of the upcoming The Linq @ Beauty World
The firm was aware that the government had plans to rejuvenate the Bukit Timah area, but did not know the specific details. “We didn’t even know about the Integrated Transport Hub when we bought our site,” relates Tan. “Based on the 2014 Master Plan, the site next door was originally zoned for a hotel and medical care facilities. We were very surprised when the Beauty World Integrated Transport Hub was announced.”
The 2019 Master Plan not only announced the new integrated transport hub, but the site that had been zoned for hotel and medical facilities had been changed to a commercial and residential site. The site at Jalan Anak Bukit, which will be part of the future integrated transport hub, was launched for sale in June this year under a dual envelope tender process that will close next March.

The future integrated transport hub will be linked underground to BBR’s site and the Beauty World MRT Station. The upcoming commercial and residential site at Jalan Anak Bukit is expected to have a mix of residences, office, hotel, serviced apartments and retail such as a shopping mall. Hence, the future residents and businesses at BBR’s new development will be able to enjoy these amenities, given its proximity, says Tan. 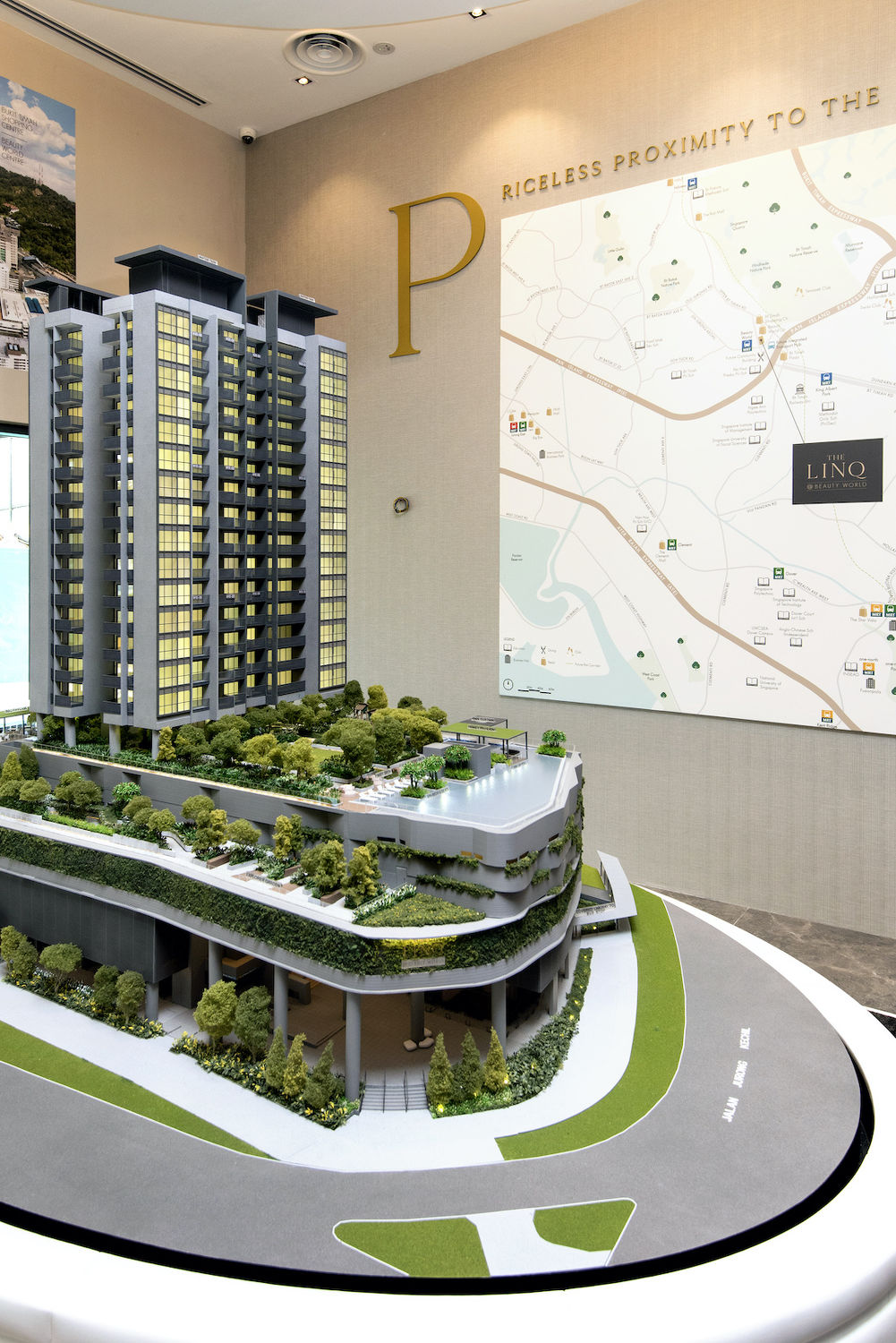 The upcoming The Linq @ Beauty World will have 120 residential units spanning the 6th to 20th floors, with the facilities deck on the fifth floor and 53 commercial units comprising a mix of F&B and office units on the first two levels
Hence, he decided to name BBR’s new development there The Linq @ Beauty World. The Cross Island Line will pass through Bukit Timah too. Tan is hoping that Beauty World MRT Station will be the interchange station for both the Downtown Line and Cross Island Line. “It will make a lot of difference to the traffic flow by serving two lines,” says Tan.
Nearby, the new Bukit Timah Community Building is under construction, while the adjacent hawker centre and wet market will be redeveloped. In the future, the Community Building will include a community club, indoor sports hall, community library and eldercare facilities. It is also directly across the road from The Linq @ Beauty World.
The former Goh & Goh Building had sat on a 30,874 sq ft, freehold site. After BBR acquired the site, it purchased close to 15,000 sq ft of state land fronting it. This expanded its area to 45,757 sq ft, giving it greater prominence along the junction of Upper Bukit Timah and Jalan Jurong Kechil.
The Linq will have a five-storey podium, with 53 commercial units across the first two levels, carpark on the third and fourth levels, and the residents’ facilities deck on the fifth level. The 120 residences span the sixth to 20th floors. They are a mix of one- to four-bedroom apartments. 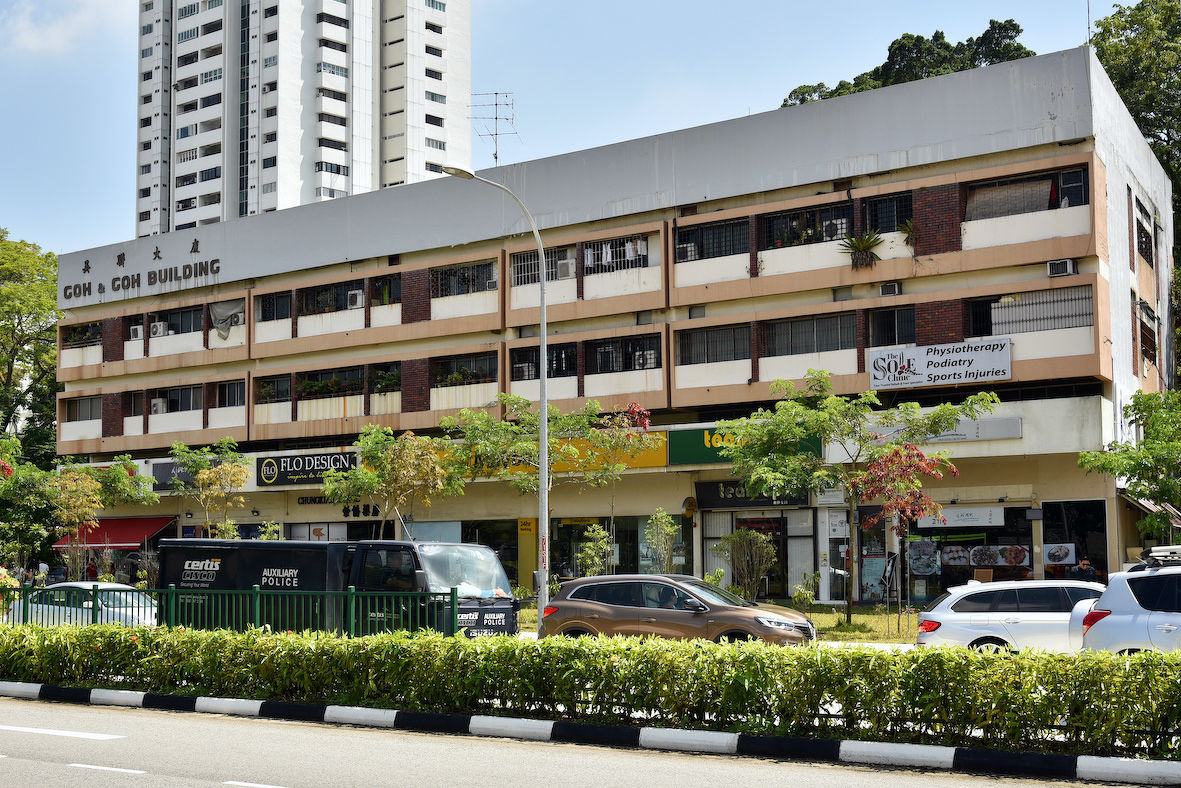 The former Goh & Goh Building that BBR Holdings had purchased for $101.5 million back in 2017

To differentiate The Linq from other mixed-use developments of a similar scale, BBR decided to forgo having commercial units and instead introduce a privately owned public space (POP) at the most premium part of the podium. “We drew inspiration from the larger malls that have ample open spaces for people to gather,” says Jeryl Sing, general manager of BBR.
Having an open space with double volume ceiling also increases the visibility of the F&B outlets on the second level, says Sing. And those dining on the second level can view the activities at the public space below. The public space is strategically positioned at the entrance to the development. “We want to create a sense of arrival,” he adds.
The entrance faces the junction leading to the future integrated hub. Hence, people have a choice of using the pedestrian crossing on the street level or the underground link, which also connects to Beauty World MRT Station. For the convenience of users, the lifts and escalators to the basement level are located at the POP of The Linq. “We envision the POP becoming a community node for events or exercise classes that will add vibrancy to the development,” adds Sing.
BBR intends to have a mix of F&B outlets and offices at the commercial space. “The office units on the second level are ideal as a co-working space too,” reckons Sing. Even though the commercial units are strata-titled, the developer will not be releasing the commercial units for sale now.
“We want to plan the tenant mix, and to lease them out first, before we consider selling,” says Tan. The preference is also to sell to a single commercial buyer rather than to multiple small buyers, he adds. 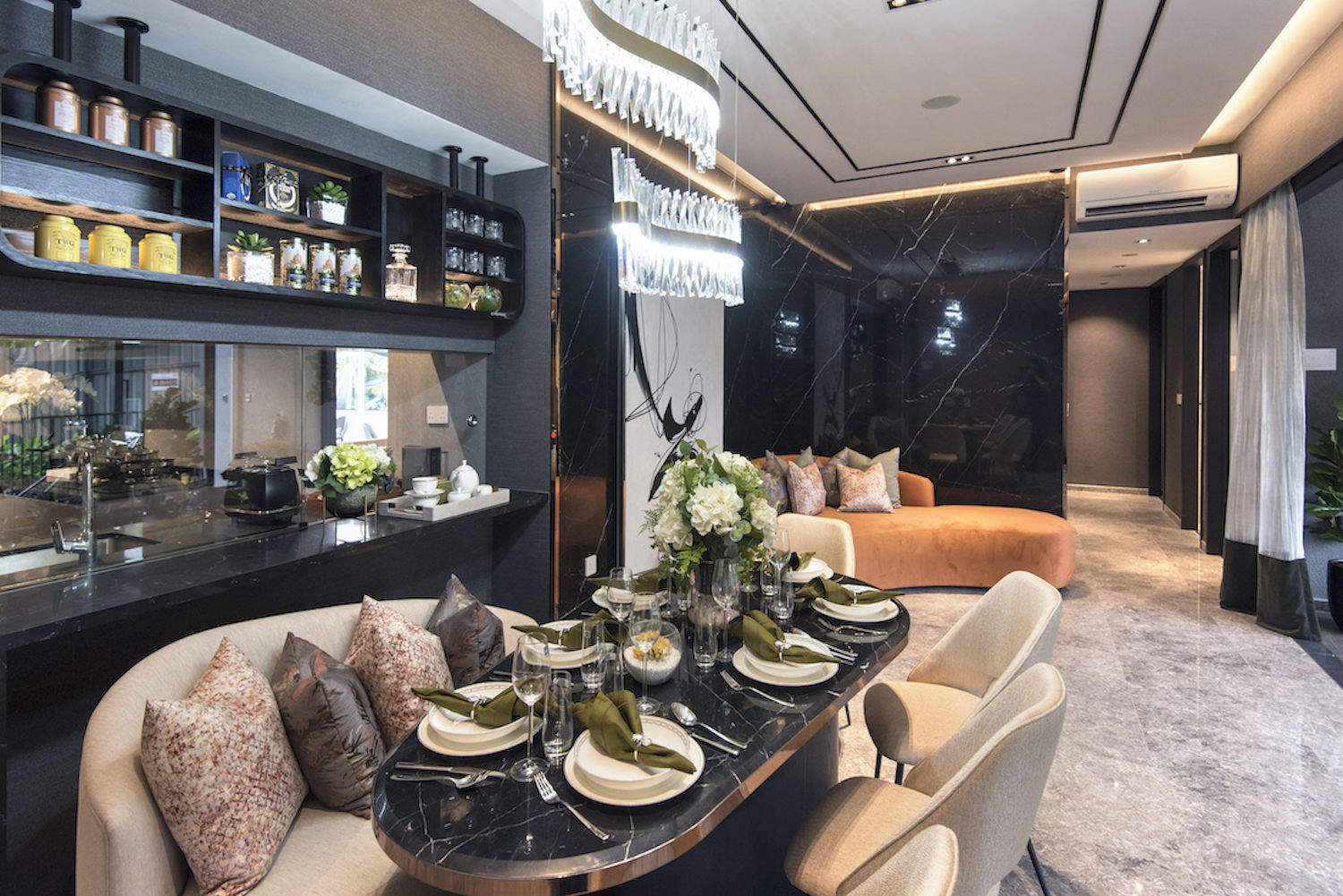 Even though there are only 120 apartments within the development, BBR is providing full condo facilities, including a 30m infinity pool, a clubhouse, a jogging track, a children’s play area and a community garden for residents. The landscape design for the project is by Ong & Ong.
The design architect is Laud, which has orientated the block so that all the units are north-south facing to minimise heat gain and maximise cross-ventilation. More than half the units will enjoy a view of Bukit Timah Hill, which is just a nine-minute walk away, points out Sing.
Units are a mix of one- to four-bedroom apartments with sizes ranging from 431 sq ft to 1,356 sq ft. One- and four-bedroom apartments make up 15 units each, which means the majority (90 units) are a mix of two- and three-bedroom units. Two-bedroom units are sized from 549 to 667 sq ft, while three-bedroom units are from 797 to 958 sq ft. 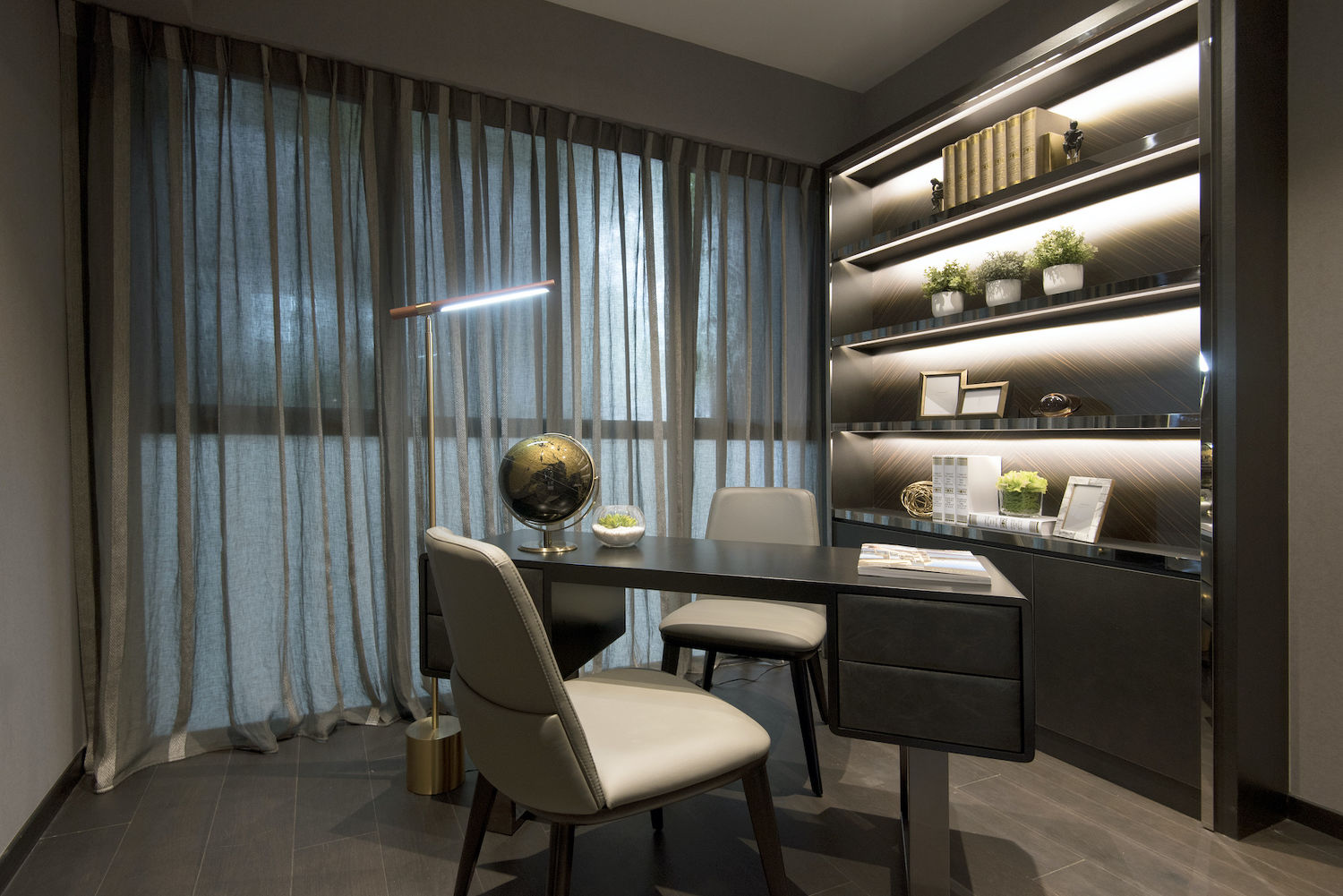 One of the bedrooms in the show unit has been converted into a home office
According to BBR’s Tan, there have already been enquiries from potential home buyers asking if they could combine units, for instance a one-bedder and a four-bedder, or a two-bedroom and a three-bedroom unit to create a larger one. “These are coming from multi-generational or family members who want to live together,” says Tan.
Given the location of the site fronting the future integrated transport hub and direct link to the MRT station, Tan expects the project to appeal to prospective buyers beyond those living in the immediate neighbourhood in District 21.
Sing estimates that there are about six new projects in District 21 that were launched in the past few years. “Of the six developments, only one is freehold,” he notes. Most of the other developments are residential, low-rise and they are not mixed-use, he adds. 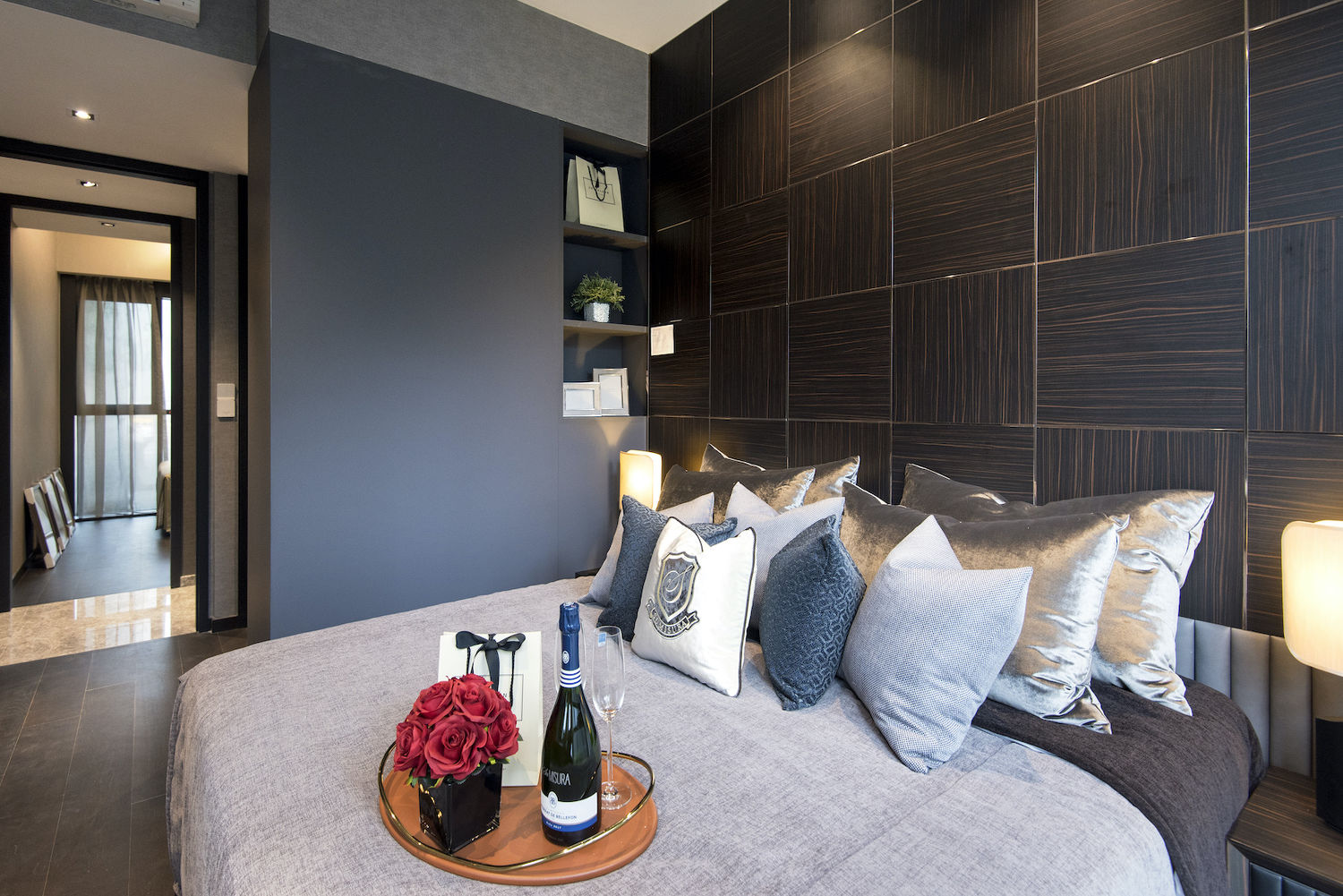 BBR aims to preview The Linq on Oct 31. Given the level of interest the project is already garnering, BBR has decided to conduct sales by virtual balloting. It will be using Showsuite’s digital booking platform to handle its expressions of interests, balloting, unit allocation as well as booking and digital signing, says Karamjit Singh, CEO of Showsuite.
Huttons Asia and PropNex are the joint marketing agents for the project. PropNex CEO Ismail Gafoor estimates that one-bedroom units could start from just below $1 million, while two-bedroom units are likely to be priced from $1 million to $2 million. “From a quantum perspective, it’s a price that many people will find palatable,” says Gafoor.
The developer had initially wanted to price the residential units at an average of $2,300 psf, but with Covid, market indication is that it is likely to be at an average of $2,150 psf instead. 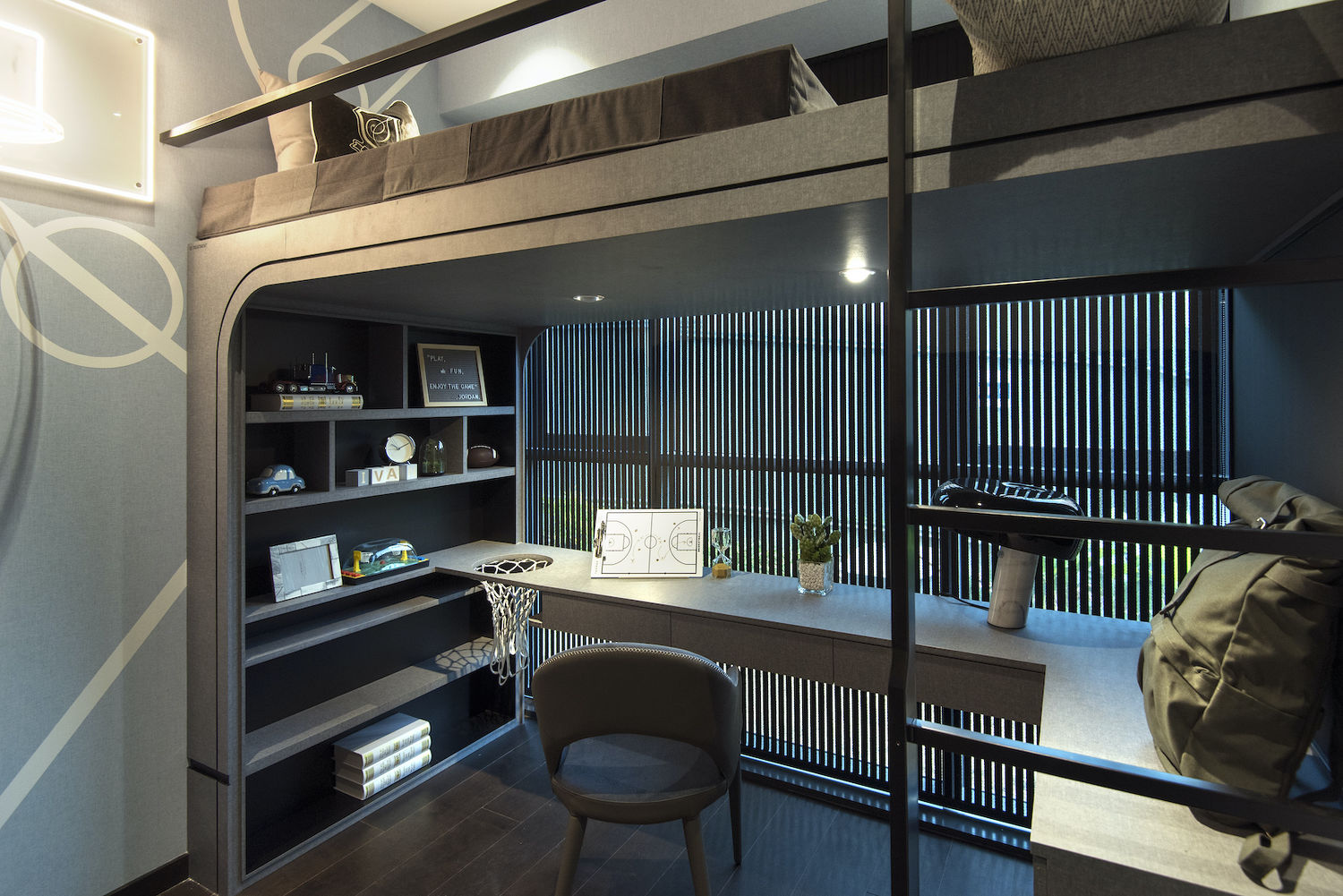 A bedroom incorporating study area for a teenaged child
The location of the site and its convenience also enhance the rentability of the units, adds Gafoor. The Linq will therefore appeal to both investors and owner-occupiers, especially singles and couples. He therefore expects to see strong interest, particularly for the one-, two-bedroom and two-bedroom-plus-study units.
Besides the integrated transport hub, The Linq is conveniently located near greenery, such as Bukit Timah Nature Reserve and the Rail Corridor, where the former Bukit Timah Fire Station and Beauty World area have been earmarked as gateways to nature and as heritage attractions.
“We hope that our project will kickstart the rejuvenation of the Bukit Timah area,” says Sing.
Reference: EdgeProp Singapore, Stars aligned at BBR’s The Linq @ Beauty World